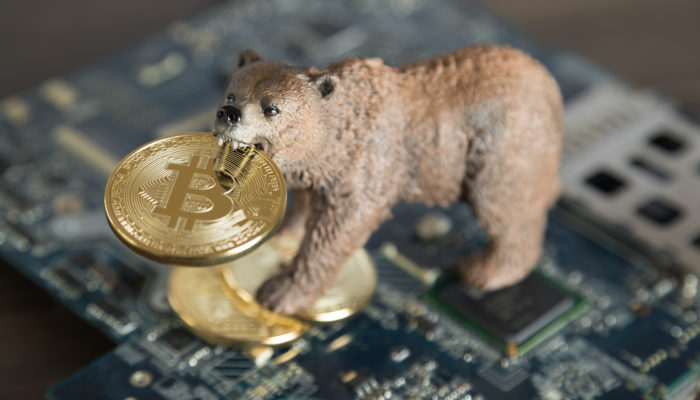 Bitcoin (BTC) has failed to maintain its recently established position in the $3,700 region, which has led it to drop over 4% today. Bitcoin’s latest downwards leg has led the entire crypto markets to drop, and most altcoins are currently trading down around 4%.

Bitcoin is now nearing the bottom of its previously established trading range between $3,550 and $4,200, which, if the former price is to be broken, could lead to another, much larger, drop.

Yesterday, Bitcoin surged to highs of over $3,750, which appeared to many analysts to be an important price level that would lead to a further surge into the low-$4,000 range. Despite this, BTC’s bulls were not able to muster up enough buying pressure to push it higher, and the bears have taken control of today’s price action.

Mayne, a popular cryptocurrency analyst on Twitter, discussed the cryptocurrency’s latest drop, noting that Bitcoin’s latest jump didn’t have a significant amount of buying pressure, which is why today’s full retrace was not entirely unexpected.

“$BTC… Discussed this one in the stream yesterday, to me Friday nights move looked just like that move to 4k Jan 6th. Thin and a liquidity grab that was fully retraced. BTC now back at the last HTF support before the lows,” Mayne explained.

Cheds Trading, another popular cryptocurrency analyst, also said in a recent tweet that if Bitcoin’s bulls fail to provide some buying pressure, things are going to get “ugly.”

“$BTC 12 hour – Bulls better show up quickly or this is going to get ugly,” he said.

Mati Greenspan, the senior market analyst at eToro, previously noted that he believes Bitcoin is caught in a relatively tight trading range between $3,550 and $4,200 within a much larger range between $3,000 and $5,000.

His theory regarding the smaller trading range was validated last Sunday when Bitcoin’s price swiftly bounced after touching lows of $3,550, but now Bitcoin is once again nearing this support level, which, if it is broken, could lead to a further move down towards the bottom of the larger trading range at $3,000.